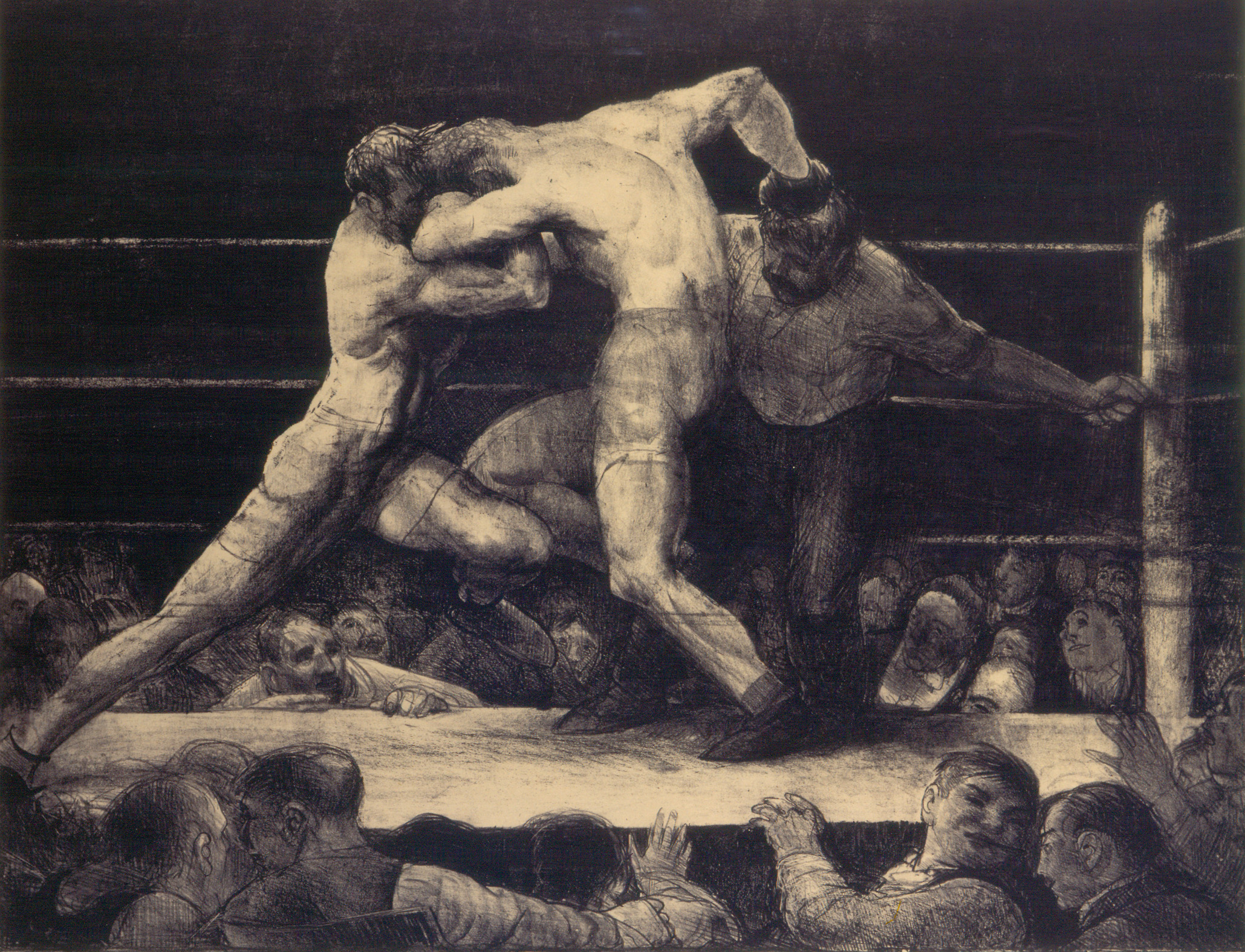 A Stag at Sharkey’s

Despite a career prematurely ended by acute appendicitis in 1925, George Bellows was arguably America’s strongest realist painter in the first quarter of the twentieth century. His art serves as a worthy bridge between that of Winslow Homer and Thomas Eakins in the later nineteenth century, and of Edward Hopper and Andrew Wyeth in the mid-twentieth century. For all the energies of his subject matter and brushwork, however, he was outpaced by the new accelerations of modern life and art. His career coincided with the development of motion pictures, the automobile, the airplane, Futurism, Einstein’s Theory of Relativity and early rocket propulsion. All of these in different ways forever altered human understanding and experience of the natural world. Born in Columbus, Ohio, where his talent as an athlete almost led him into professional baseball, he returned throughout his painting career to vigorous sporting images: boxing, polo, and tennis. Although many of these showed figures in action, painted with a sense of the immediate moment, with vigorous brushstrokes and often new experimental theories of color, Bellows and a number of his contemporaries never fully grasped the profound new expressions of space, time and movement of this century.

During this turbulent period, which culminated with the outbreak of World War I, Bellows created a consistently personal and powerful body of art, largely centered on the human figure as a forceful physical or emotional presence. A warm-hearted family man, he was at his best painting relatives and friends. He moved to New York City just after the turn of the century, and was drawn into the circle of Robert Henri’s friends and students. His earliest subjects are firmly in the Ashcan manner, ordinary city types painted quickly and in generally dark colors. Two circumstances had a critical impact on the development of his art: in 1911 Bellows spent his first summer on Monhegan Island off the Maine Coast, and two years later the Armory Show introduced theupheavals of European artistic modernism to New York and America. On the bold and isolated Maine island he found some of his starkest subjects in the formidable cliffs and churning surf, which he painted over the next few years with an eye to his famous Maine predecessor, Winslow Homer. To his portraits at this time he also brought Homer’s example of strong brushwork and reductive form. Painted at Monhegan in August, 1914, Geraldine Lee #2 is such a work.

The sitter was the daughter of a local fisherman, and Bellows first posed her for a portrait in July of that summer. In Geraldine Lee #1 (1914, Washington University, St. Louis), her torso was turned in a slightly three-quarter view; subsequently, however, the canvas was cut down to more of a head- and- shoulders format. In the second version, owned by the Butler Institute, she faces us directly, sitting virtually centered in the canvas, frontally aligned and parallel to the framing chair behind. Bellows’s awareness of the new theories of color and design in the wake of the Armory Show is evident in the clearly calculated arrangement of echoing, nearly geometric shapes, the subdivision of the canvas surface into rectangles of color, and the palette of closely related purple and mauve hues. Broad areas of the background (chair back, hanging drapery, and white wall) are painted thickly with wide brushes, and fit together almost like solidly textured blocks. But this is more than a mere color study or artful composition: there is an assured personality sitting before us, straightforward yet sympathetically seen. The alert solid face and elegant relaxed fingers suggest a complex character on the threshold between youth and maturity, which obviously held Bellows’s scrutiny over much of that summer.

Bellows’s portraits of this period reveal someone very much in control of his stylistic elements, creating variety and individuality in each adjustment of pose, coloring, and setting. To keep the figure of Geraldine Lee from being compressed into a two-dimensional grid he ingeniously painted her right arm extending towards us on the arm of the chair, in an unobtrusive tour-de-force of fore shortening. Such a synthesis of technical bravura, awareness of human presence, and aesthetic coherence owes much to the three American masters for whom he acknowledged his overriding admiration: “Winslow Homer is my particular pet. And one other American or better, two, stand on the same pedestal with him, in my mind…. Thomas Eakins and Whistler.” We have already noted the appeal to Bellows of Homer’s strong brushwork and solid realism; in turn, Eakins’s later portraits of single figures in darkened settings offered penetrating examples of a sitter’s inner life and character; while the portraits of James Abbott McNeill Whistler conveyed to Bellows a concern with the harmonies of formal arrangement. It is Bellows’s singular achievement that his own work was no mere derivation or synthesis of his sources, but fresh and original in its own honesty of expression.

A Stag at Sharkey's